Air quality in Poland in the past autumn and winter season is a topic that moved everyone. Pollution standards were reported to have been exceeded significantly in many cities day after day. Smog apps appeared, as well as the first lawsuits of Poles against the state in this matter. Smog maps, just like allergy warnings, have become an inherent element of weather forecasts. The announcements instructed how to read data and educated on the harmful effects of smog on the health of older people and children in particular.

PRESS-SERVICE Monitoring Mediów conducted media analysis of the presence of the phrase ‘smog’ in the media between 1 September 2018 and 31 March 2019. The report covered both traditional media and social networks.

In the covered period, a total of 539,000 publications appeared on the Internet, in the social media, in the press, on the radio and television. The reach of these publications* amounted to 2.1 billion of potential contacts. The value of materials was estimated at PLN 692 million – this is what their AVE** is. The largest media activity occurred in December last year – there were 134,000 publications then. 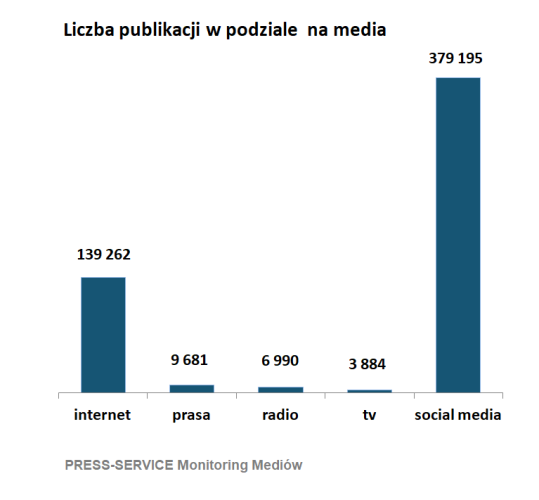 1. The number of publications divided by medium type

Social media were the most active

The social media had the dominant share in the coverage – user entries and comments accounted for as much as 70 per cent of all publications about smog. On Facebook, Twitter, YouTube, Instagram, Wykop, blogs and forums, a total of 379,000 publications were found. 305,000 came from Facebook, 47,000 from Twitter, 14,000 from Instagram, and 9,000 from YouTube. The reach of the coverage was estimated at 256 million potential contacts. The activity of people using social media channels is best reflected by the number of interactions, including likes, comments and sharing – there were 3.5 million of such reactions together.

The majority of authors of entries and comments whose gender could be determined were men – 60 per cent. The most influential authors included: SmogLab (whose reach was estimated at 3.2 million potential contacts), Robert Biedroń (1.5 mln), Gazeta Wyborcza (1,9 million), Krakowski Alarm Smogowy (1.8 million) and Elżbieta Czrepowicka (elzbieta.czrepowicka) (1 million).

The issue of smog became particularly important to Internet users already in October – the number of entries and comments grew then in comparison with September by over 200%.

Radio coverage had the highest reach 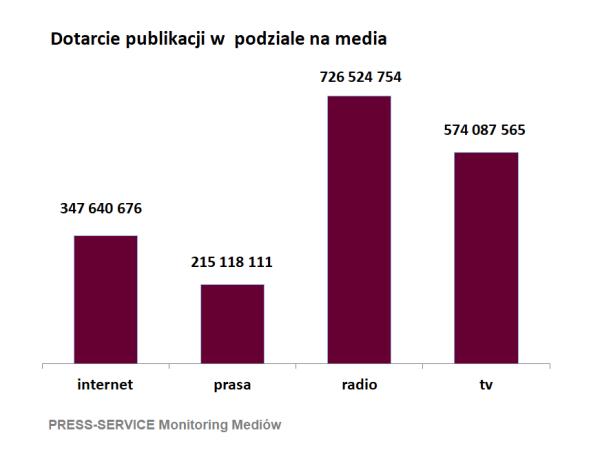 2. The reach of publications divided by medium type

Radio TOK FM aired as many as 752 materials concerning smog and was the most active source according to the report of PRESS-SERVICE Monitoring Mediów. The leader of online portals was the website Echodnia.eu (739 results). TVN24 generated 578 materials, and the most active press source was Dziennik Polski (343 publications).

In contrast to social networking sites, in traditional media a significant increase in the number of publications was not recorded until November last year (45,000 publications). In December this number increased to 59,000 and a month later it dropped to 17,000.

Smog is the biggest nuisance in Silesia

The topic of air quality was definitely taken up more often by regional media – 127,000 publications appeared in them, which accounted for 79% of the coverage in traditional media. The highest number of publications, as many as 17,000, appeared in the Śląskie province. Nearly 16,000 came from online sources, 900 – from print media. The most active sources included: Naszemiasto.pl, Dziennik Zachodni, Radio ESKA Śląsk and Gazeta Wyborcza – Katowice. 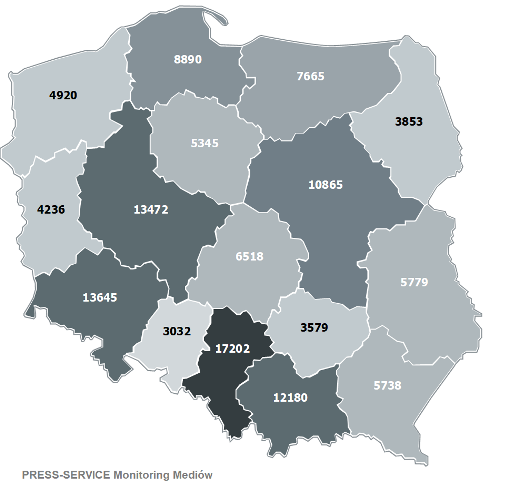 Map. The number of publications in regional media

Problems associated with smog were also often addressed by the media in the Dolnośląskie, Wielkopolskie, Małopolskie and Mazowieckie provinces, as well as in the Pomorskie and Warmińsko-Mazurskie provinces.

*Reach – is a metric used to assess the real number of contacts with a single publication. It is assigned to a specific publication and concerns the real behaviour of its recipients – the ways and the frequency of using the communication channels.

**Advertising Value Equivalency (AVE) is a metric used to assess the significance of media information by comparing the size of publication, the number of page views, the number of unique users, or broadcast duration to analogous advertisement. It is expressed as the sum of financial resources that should be spent on such an advertisement.

Estimated AVE takes into account the value of the entire publication.

See our media reports at: http://psmm.pl/pl/raporty-specjalne