The protests triggered by the Constitutional Tribunal’s decision on abortion have taken over the media space in recent weeks. Between 22 October and 12 November, there were nearly 900,000 publications on the issue and the communication impact was at the level of over 3.8 billion potential recipient contacts with the information, shows a report by PRESS-SERVICE Monitoring Mediów.

The data came from the monitoring of over 1,100 press titles, 5 million Polish-language websites, including the most important social media and 100 radio and TV stations.

The debate in social media took the greatest proportions. In the analyzed period, the users of Facebook, Twitter, Instagram, YouTube, Wykop, blogs and forums published over 719,000 posts and comments, i.e. 80 per cent of the entire communication. There were 303,000 of them on Facebook alone! The impact of social media mentions might have reached up to 1.4 billion potential contacts. The scale of opinions shows how much Polish people were moved by the issue.

17 per cent of the reports came from the Internet – in total it was nearly 154,000 pieces of information with the impact of over 686 million contacts. A better result was generated by radio station content – 919 million for the sum of over 13,000 features devoted to assemblies, marches, blockades and strikes. 3,600 pieces of news with the impact of 723 million were broadcast on TV. The fewest number of publications was published in the press (5,300) and they could have generated 96 million potential contacts with recipients.

Chart 1. Number of publications on the protests and their impact

Most, i.e. 46 per cent of the reports were neutral in sentiment. At the same time, as much 41 per cent had features of a positive approach to the protests. This was the case of reports by RMF FM, Radio ZET, TVN, TVN24, “Angora”, “Gazeta Wyborcza”, Wirtualnemedia.pl, Businessinsider.com.pl, Money.pl, Finanse.wp.pl, Rp.pl, Niezalezna.pl and Next.gazeta.pl. A clear voice shared by all those reports was the strong opposition to the government’s actions and the firm rejection of the Constitutional Tribunal’s decision as an attack on women’s freedom in Poland.

The remaining 13 per cent of the communication presented the protests in a negative light. Such information was broadcast on TVP1, TVP2, TVP Info, Polish Radio Channel 3, Tvp.info, Polskieradio24.pl, Polskieradio.pl, Radiomaryja.pl, Wpolityce.pl, Dorzeczy.pl and Salon24.pl. Among other things, the reporters emphasized the bad language in the slogans used by the protesters.

“Right-wing media focused mainly on the negative sides of the high density of people on the streets of many Polish cities during the COVID-19 pandemic,” says Bartłomiej Pomałecki, media analyst at PRESS-SERVICE Monitoring Mediów. The image of the activists with the National Women’s Strike was shaped by presenting them as a factor threatening social wellbeing because, by encouraging further protests, they could increase the incidence of the coronavirus. There were also bold theses arguing they were responsible for “attacks on churches, priests and believers.” Companies which decided to openly support the protesters were also criticized.

Chart 2. Number of publications about the slogans used in the protests

In pro-government media, many reports attempted to ridicule the strikes and devalue them. Opponents of the protests often manipulated communication on the Internet. An example of such disinformation was a montage of a photo that came from the 2017 women’s strike. The real inscription on the banner read “Mad Polish Women”. [translator’s comment: the montage reads “Mad Whores] 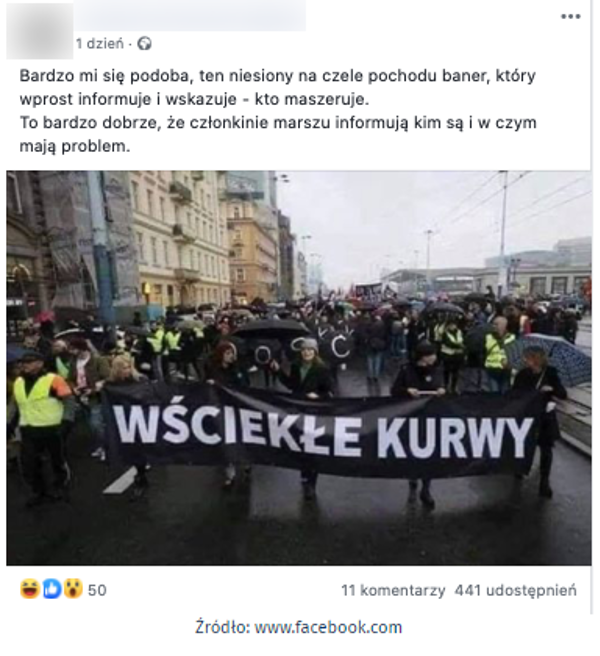 Additional conclusions can be drawn from the analysis of broadcasts on the main TV news channels prepared by PRESS-SERVICE Monitoring Mediów for “Presserwis” between 22 and 26 October 2020. It shows that, taking into account the total of 3 stations, it was mostly men who were invited to comment on the developments following the ruling of the Constitutional Tribunal. On Polsat News, women accounted for 17.44 per cent of the commenters, on TVP Info, it was 25.98 per cent. Only on TVN24, the share of women was 66.22 per cent.

The “Polish Women’s Strike” Facebook page turned out to be the most active in social media (2,311 posts). The following places were taken by the Facebook pages of DoRzeczy.pl (1,601) and Tvp.info (1,098) as well as the Strajk_kobiet account on Instagram (1,046) and Gazeta Wyborcza on Facebook (930). It is worth noting the exceptional activity of Szymon Hołownia who made 811 posts on Twitter in the analyzed period. In addition to social media sources, the most active outlets included Onet.pl (1,003 pieces of information), TVN24 (916) and Radio TOK FM (846).

See other reports for the media: http://psmm.pl/pl/raporty-specjalne