Every day of the third quarter of 2016 provincial cities appeared in 29 thousand publications, thus getting a promotion worth PLN 167.8 million – according to a cyclical report prepared by PRESS-SERVICE Monitoring Mediów. Which cities are in the lead?

Warsaw is the unquestioned leader of the ranking. Between July and September 2016 there were 444 thousand publications on the capital city. The subsequent positions were taken by: Cracow (223.4 thousand materials), Poznań (165.5 thousand), Wrocław (139.4 thousand) and Gdańsk (124.8 thousand). The remaining positions in the TOP 10 belonged to Łódź, Katowice, Szczecin, Lublin and Białystok. The ranking is closed by Opole, Zielona Góra and Gorzów Wlkp. 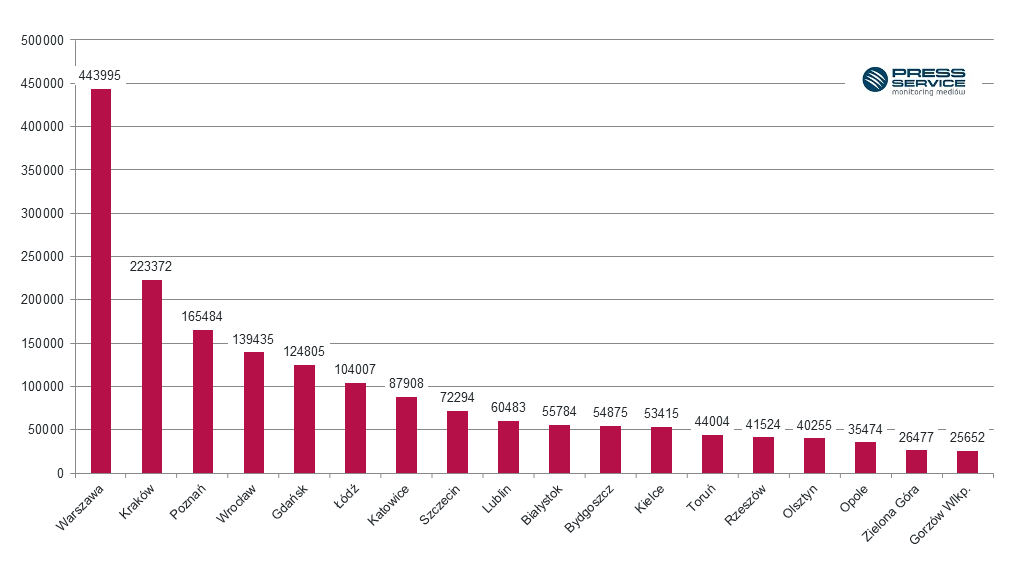 The capital city was present primarily in online publications – 79% of the coverage. The biggest number of materials was published by Stooq.com, Kulturadostepna.pl and Warszawa.eska.pl. The second most popular medium that informed about Warsaw was the press – 11%. The issue was raised primarily by journalists from ‘Rzeczpospolita’, ‘Gazeta Wyborcza’ and ‘Gazeta Wyborcza – Warszawa’. 6% of the coverage were radio materials, primarily from Program 1 of the Polish Radio, Radio TOK FM and Program 3 of the Polish Radio. Only 5% of mentions came from the television. The most active channels were: TVP Info, Polsat News and TVN24.

Warsaw also became the leader of the ranking in terms of impressions. Materials on the capital city might have reached 288 billion readers. Cracow and Poznań were also on the podium. The former generated impressions at the level of 127 billion potential reader contacts and the latter – 90 billion.

If city authorities wanted to achieve the same level of exposition of cities under analysis, they would have to spend more than PLN 10 billion on advertising! In terms of promotion, Warsaw gained the most – analysts estimated that AVE for the city amounted to PLN 3 billion. AVE for Cracow amounted to PLN 1.3 billion and for Poznań – to PLN 0.8 billion.