The Europa League was the guarantor of Lech’s media success

The Europa League was the guarantor of Lech’s media success

Lech Poznań dominated the ranking of PKO BP Ekstraklasa football clubs in October. The club’s performances in the Europa League obviously contributed to its very good result. It was the first change in the leader of the ranking since January 2019, shows a report by PRESS-SERVICE Monitoring Mediów.

The second-best team in Poland played three matches in European cups in October. First, at the beginning of the month, it was promoted to the Europa League group stage by defeating Belgian Charleroi and then, already as part of that competition, it suffered defeats against Benfica Lisbon and Glasgow Rangers. Each of these matches was widely commented not only in the press, radio, television or the Internet but also in social media. In October, there were nearly 47,000 mentions about Lech Poznań while the runner up Legia Warsaw a had just over 30,000 of them. It was the first change in the leader of the PRESS-SERVICE Monitoring Mediów ranking since January 2019 when Legia was dethroned by Wisła Kraków for a month.

The second place was taken by Legia Warsaw for which October began with an unexpected defeat by Karabakh Agdam in the last qualifier round for the Europa League. After that match, a wave of criticism poured out on the Warsaw club, both in the media and in social media posts. What is more, a few days later, the team from Warsaw lost its Polish Super Cup match to Cracovia, recording two defeats in the first three matches under new coach Czesław Michniewicz. The remaining days of October were much better and Legia collected seven points in three league games.

The winner of the Polish Super Cup, Cracovia, came third in the ranking, getting slightly ahead of Śląsk Wrocław. As usual, the top five included Wisła Kraków. Despite its great sports results, Raków Częstochowa was only ranked 11th in the media popularity ranking. 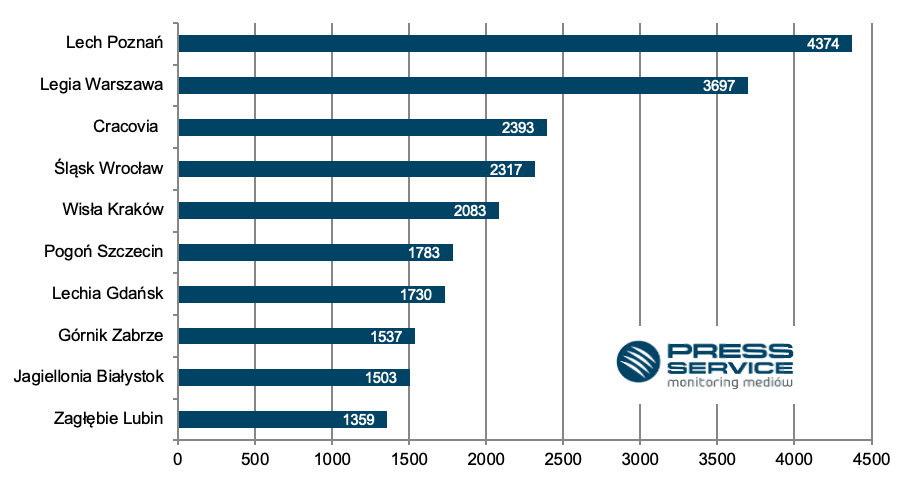 In Fortuna 1. League once again there were no changes in the leaders which include newcomers Widzew Łódź, teams relegated from PKO BP Ekstraklasa, i.e. Korona Kielce and Arka Gdynia as well as Radomiak Radom which lost to Warta Poznań in the previous season play-offs for the promotion to the highest league in Poland. In October, the team from Kielce was the best as it was the only one, apart from Widzew, to exceed 1,000 publications in the PRESS-SERVICE Monitoring Mediów ranking. 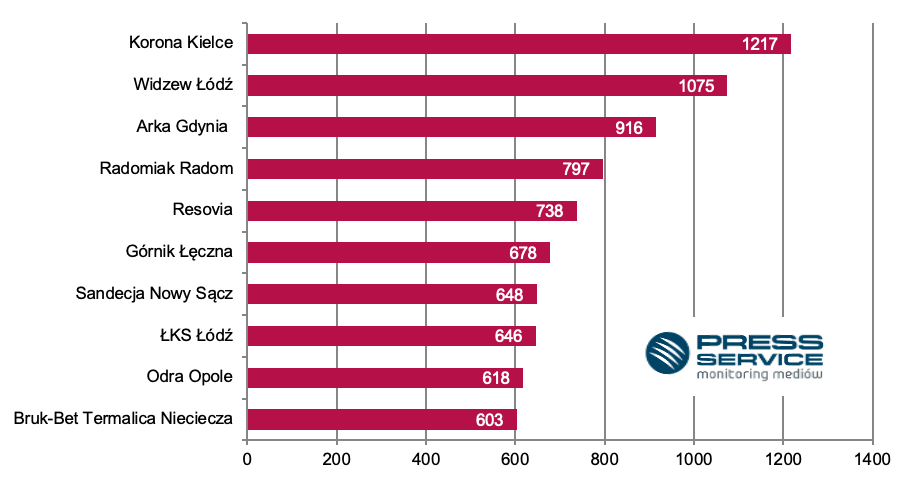 Robert Lewandowski was once again the winner of the October media popularity ranking of Polish footballers who play for clubs in one of the five strongest European leagues. In October, “RL9” recorded an exceptionally significant advantage, i.e. nearly four times more publications than the second-best footballer in the ranking. Poland’s best football player scored nine goals and had one assist in that period. Even though he does not play for his club, Arkadiusz Milik is still very popular with the media, taking the second place in the ranking. Right behind him was Piotr Zieliński who did not play in October due to coronavirus infection. Obviously, the situation attracted a lot of interest from the media. Sebastian Walukiewicz’s place in the top ten deserves attention as he gets good reviews for his performances for Cagliari Calcio. 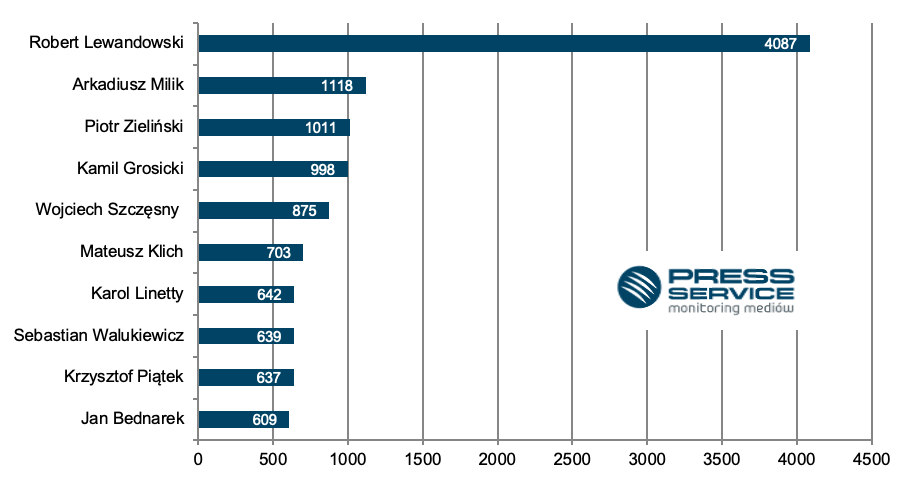 “Football in the game”, formerly known as “Polish Football,” is a periodical analysis conducted by PRESS-SERVICE Monitoring Mediów. It covers the media popularity of clubs in the Ekstraklasa and the 1st League and Polish footballers who play in the Premier League, Primera Division, Ligue 1, Serie A and the first Bundesliga. The analysis process covers over 1,100 press titles and selected websites. Moreover, the analysts check the popularity of Ekstraklasa clubs in social media (Facebook.com, Twitter.com, Youtube.com, Instagram.com, Wykop.pl). The study has been conducted cyclically starting from 1 March 2010. To date, over 1.8 million pieces of information have been taken into account.

See other reports for the media: http://psmm.pl/pl/raporty-specjalne