Media on the light side of the force? Report by PSMM

New episodes of cult-object “Star Wars” are eagerly awaited by people across the globe. Huge interest can be observed also in the social media: in the past month, the Polish have published 33.5 thousand mentions on the premiere of “The Force Awakens”. On its media promotion, the film has already earned PLN 41.5 million, finds a report by “PRESS-SERVICE Monitoring Mediów”.

The fans have been waiting for another episode of the saga for years. The world premiere took place on 15 December at three cinemas in Los Angeles. Already on that day, Twitter was boiling with comments. But in the large part of the world, including Poland, the film will be shown for the first time on Friday, 18 December. According to the Polish Filmmakers Association, the latest episode of the legendary series will be shown on 600 screens across Poland. It is a record number! Film makers outdo one another in forecasting the place the work will occupy in the ranking by the number of viewers gathered in cinemas at the premiere weekend. Many of them predict that the film will establish a new sales record. A new record has already been set up in the United Kingdom – as many as 500 thousand tickets for the opening weekend were sold in pre-sale channels.*

In Poland the film enjoyed high interest of the media even before the premiere. 46.6 thousand materials were published on the subject in the period from 16 November to 15 December, including 12.7 thousand publications in the conventional media – press, Internet and Internet portals, and 33.5 thousand in the social media. 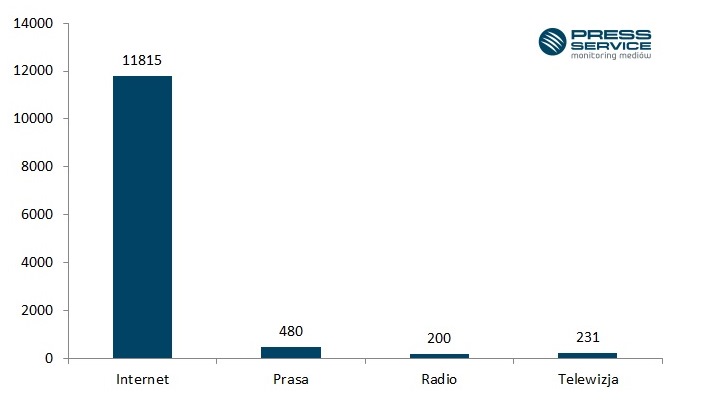 68 per cent of the materials came from regional sources. The material published by sources reaching nationwide accounted for just 32 per cent. All the publications generated impressions of 3.1 billion potential contacts, with the advertising value equivalent totalling PLN 41.5 million.

A huge leap in the popularity of the work initiated by George Lucas was observed on 8 December – an increase of 1.3 thousand publications day on day. It concerned, among others, the first airing of another short television spot, which presented a few new scenes from the film. A steady increase in the popularity of the subject has been observed by analysts at ”PRESS-SERVICE Monitoring Mediów” ever since 12 December.

“Judging by experience, we are yet to see the greatest activity of the media. A peak in the number of publications referring to J.J.Adams’s film will probably be recorded on Thursday, 17 December, in relation to numerous announcements of the film, or on the following day, in relation to the premiere and publication of reviews. Undoubtedly, the film “Star Wars: The Force Awakens” is one of the most popular premieres in the media this year,” says Alicja Dahlke-Jurgowiak, marketing and PR expert at „PRESS-SERVICE Monitoring Mediów”.

Internet users were particularly active on Twitter, where they published 2.3 thousand tweets in the period under the present analysis. The largest number of tweets on the subject were posted on 2-3 and 15 December, when the number of potential contacts was the highest.

Considering the number of potential contacts, the media were dominant – Gazeta Wyborcza.pl (@gazeta_wyborcza), tvn24 (@tvn24) and TVP Info (@tvp_info). A large number of impressions were observed also in the case of Bartosz Węglarczyk (@bweglarczyk) and Weekly WPROST (@TygodnikWPROST).

Chart 4. Twitter users with the largest number of impressions of publications on the subject of the premiere of “Star Wars: The Force Awakens” and the number of tweets.

The most popular hashtags referring to “Star Wars: The Force Awakens” included also #forcefordaniel – an action thanks to which the dream of cancer-victim David could be fulfilled. Disney organized a pre-release showing of the seventh episode of the saga. The action was supported by actors appearing in the film, including Mark Hamill, John Boyega, Daisy Ridley, Warwick Davis and Peter Mayhew. The popular hashtags included also #kolej and #pkp, which referred to the promotion of the film on trains in Japan.