Nearly 33 thousand materials were published in the media in 2015 on the subject of the 10 most popular Polish marathons. 40 per cent of the media content was dedicated to events organised in the capital city – Warsaw Marathon and ORLEN Warsaw Marathon. Cracovia Marathon took the third place on the podium. 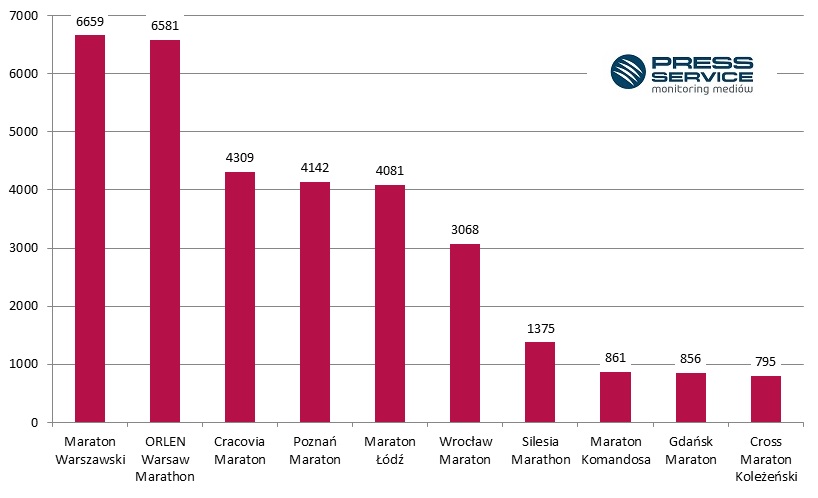 “Above all, marathons are an excellent form of promotion for cities. They attract hundreds of participants and crowds of fans, and the media interest in marathons is increasing year by year. Comparing the number of media materials dedicated to the events organised in 2014 and 2015, we can see that the media interest in such events has doubled! The fact is taken into accounts by sponsors,” comments Marlena Sosnowska, the press spokesperson for “PRESS-SERVICE Monitoring Mediów”.

Poznań Marathon is the leader of covers

An analysis of the marathons’ media presence on the first pages of newspapers and magazines has shown that the top places in the media were given to the marathon that is classified just behind the podium. Poznań Marathon was mentioned in 12 materials published on page 1 and in 8 materials published on page 2. Wrocław Marathon and Cracovia Marathon boast one mention fewer on page 1. On page 2, the capital city’s events rank high: ORLEN Warsaw Marathon (7) and Warsaw Marathon (6). 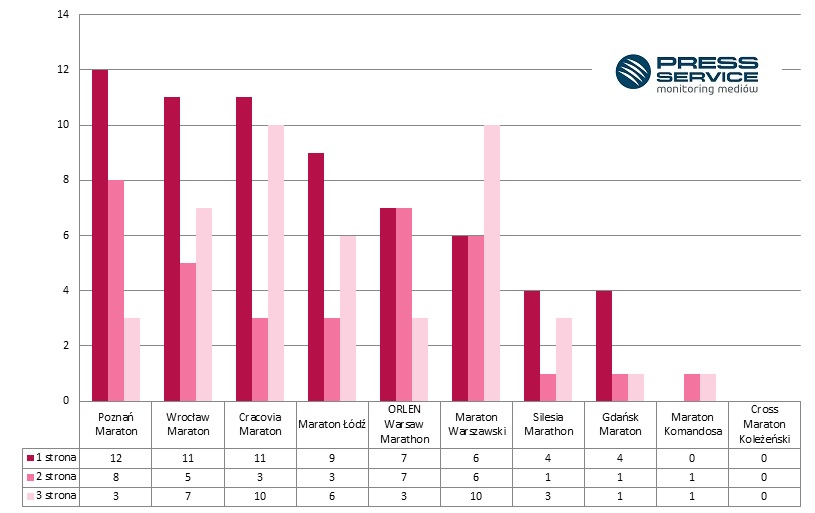 Cracovia Marathon was the strongest in social media

On the radio and television, the leader was Warsaw Marathon – 0.3 thousand materials in each. On television, Poznań Marathon comes first – 0.2 thousand.

Nearly 47 per cent of all the materials on Top 10 Polish marathons were published by national media. The largest share in this type of publications is boasted by Poznań Marathon – 67 per cent, Cracovia Marathon – 66 per cent and Wrocław Marathon – 62 per cent. Regional media, in turn, were dominated by information on Koleżeński Cross Marathon (98 per cent), Commando Marathon (89 per cent) and ORLEN Warsaw Marathon (68 per cent). 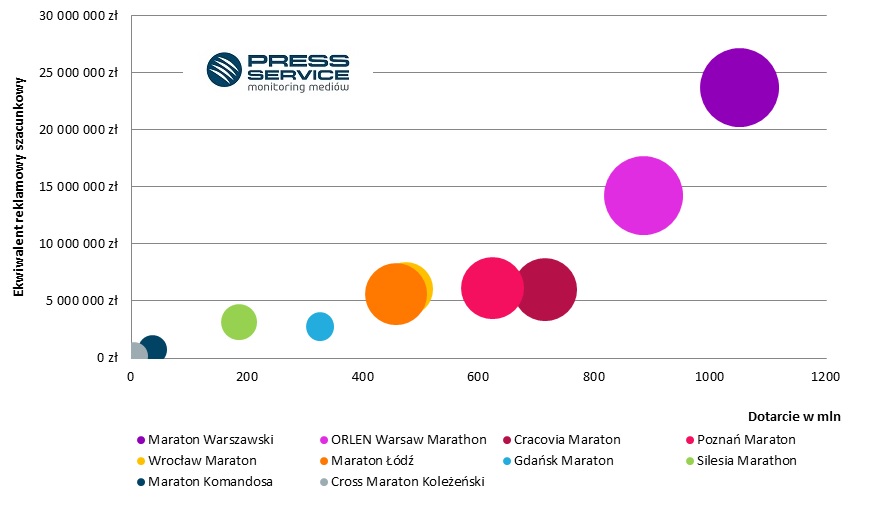 Despite a small difference in the numbers of publications between the two leaders of the ranking (78), the analysis of “PRESS-SERVICE Monitoring Mediów” shows that the information on Warsaw Marathon had a much higher value when considering the advertising value equivalent of the publications. The AVE of the materials on this marathon was estimated at PLN 23.7 million, in relation to PLN 14.3 million for ORLEN Warsaw Marathon. The third result was achieved by Poznań Marathon (PLN 6.2 million), followed by Wrocław Marathon (PLN 6.1 million) and Cracovia Marathon (PLN 6.0 million).