Analysis of polish blogosphere – with these bloggers it is worth cooperating

Bloggers effectively break through to the mass media, including the conventional ones – press, radio and television, finds Poland’s most comprehensive analysis of the Polish blogosphere, conducted by “PRESS-SERVICE Monitoring Mediów”.

The report covers the period from 1 January to 31 December 2015. 100 blogs in 10 different categories were analysed for their presence in the media. The three most frequently mentioned blogs in each category were subjected to a qualitative analysis.

The podium was dominated by fashion websites. With 4.9 thousand publications, Julia Kuczyńska’s blog Maffashion.pl tops the ranking. Behind it, there ranks the blog by Jessica Mercedes Kirschner – Jemerced.com (4 thousand materials), ahead of Kasia Tusk’s portal – Makelifeeasier.pl (3.4 thousand). 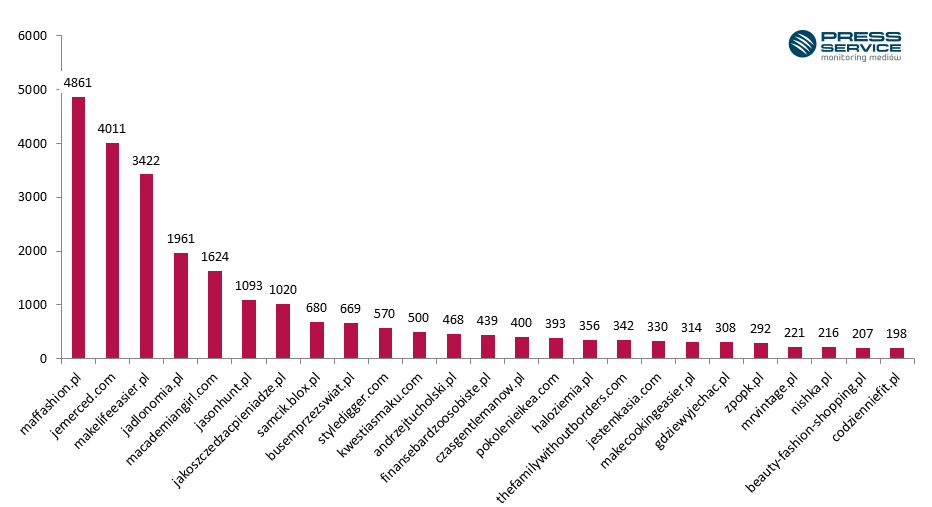 “A media report is an excellent source of data that are indispensible in making decisions on cooperation with bloggers. It provides comprehensive information on the image of a blog in the media and its potential for promoting a particular brand. Such an analysis is indispensible also in selecting optimum tools for implementation of strategies and for price valuation,” explains Marcin Szczupak, manager of the department of media reports at “PRESS-SERVICE Monitoring Mediów”.

Fashion, lifestyle and cooking in TOP 3

Fashion blogs enjoyed the greatest interest of the media (12.4 thousand publications). Other sectors we often hear about in the press, on the radio, television and Internet in the context of blogs are: lifestyle (5.7 thousand), cooking (3.5 thousand), finances (2.3 thousand) and travel (2.1 thousand). The media referred less often to blogs in the categories of current affairs, specialist, home and hobbies, parenting, health and beauty blogs.

In terms of promotion, the fashion sector benefited the most: the media materials on this subject were worth PLN 110.2 million. A very high advertising value equivalent was recorded also in the categories of lifestyle (PLN 38.2 million), cooking (PLN 27.2 million) and finances (PLN 22.8 million).

The leader of the home and hobbies category Zuchrysuje.pl outdistanced rivals on the Internet. 164 publications on the subject of this blog were identified in the media in 2015. Its advantage over Greencanoe.pl, occupying the second place, was 23 materials. At the third place there is Twojediy.pl.

Journalists wrote about finances predominantly in reference to Jakoszczedzacpieniadze.pl. Michał Szafrański’s blog enjoyed special popularity on the Internet: as much as 89% of the materials came from this medium, chiefly from portals Dzielnicarodzica.pl, Samcik.blox.pl and Polskieradio.pl. On the radio and television, the leading position was occupied by Maciej Samcik’s service – Samcik.blox.pl, which was referred to mainly on TVN24 BiŚ, Radio TOK FM and TVP Info. At the same time this blog occupied the second place by the number of publications. The third place was taken by the blog Finansebardzoosobiste.pl.

In the cooking category, the first place is occupied by jadlonomia.pl with a result of 2 thousand publications. Kwestiasmaku.com appeared in 500 materials and the TOP 3 is closed by Zosia Cudny’s blog with presence in 314 publications.

In the category of lifestyle, the leader is Kasia Tusk’s blog Makelifeeasier.pl, referred to by 3.4 thousand media materials, including 3 thousand on the Internet, 0.3 thousand in the press and 0.1 thousand on radio and television. The second place is occupied by Jasonhunt.pl. The analysis of the publications has found that the blog was mentioned most frequently at Vademecumblogera.pl, Natemat.pl and Spidersweb.pl. On the podium there is also the blog Pokolenieikea.com.

The fashion category enjoyed the greatest interest of the media, which translated into good results of the particular blogs. The top places in this category are occupied by: Maffashion.pl, Jemerced.com and Macademiangirl.com. In the case of these blogs, a clear upward trend was observed in their media presence at the end of the year.

In the category of parenting, the first place is occupied by the blog Bakusiowo.pl with 186 materials, followed by Zuchpisze.pl (145) and Shinysyl.com (95). The leader marked the strongest presence in the media in August, mainly at Wirtualnemedia.pl, Infowire.pl and Polski.pl.

Busemprzezswiat.pl became number 1 in the ranking of travel blogs. Its results is nearly twice as high as that of Thefamilywithoutborders.com, which ranked second. Gdziewyjechac.pl found itself at the third place – nearly 71.7 million Internet users could have potentially had contact with it.

Andrzejtucholski.pl conquered the category of current affairs blogs. In 2015, journalists wrote 468 texts on the subject of this website. Internet materials accounted for 93 per cent of the total. Blog Haloziemia.pl by Konrad Kruczkowski generated 100 fewer publications. The third place in the ranking is occupied by Zpopk.pl.

In the category of health and beauty, the most popular blogs were: Codzienniefit.pl (198 publications), Anwen.pl (82) and Kosmetyczna-hedonistka.blogspot.com (57). The leader of this category was referred to most frequently at Martapisze.pl, Gazetawroclawska.pl and Walbrzych.naszemiasto.pl.

See other reports for the media at http://psmm.pl/pl/raporty-specjalne