The wall of shame has fallen. Over 35,000 #METOO #JATEŻ publications in polish media

When on 15 October American actress Alyssa Milano posted a tweet about sexual violence she did not even expect the striking power it might gain. “PRESS-SERVICE Monitoring Mediów” examined the reverberations of the tweet in the Polish media. 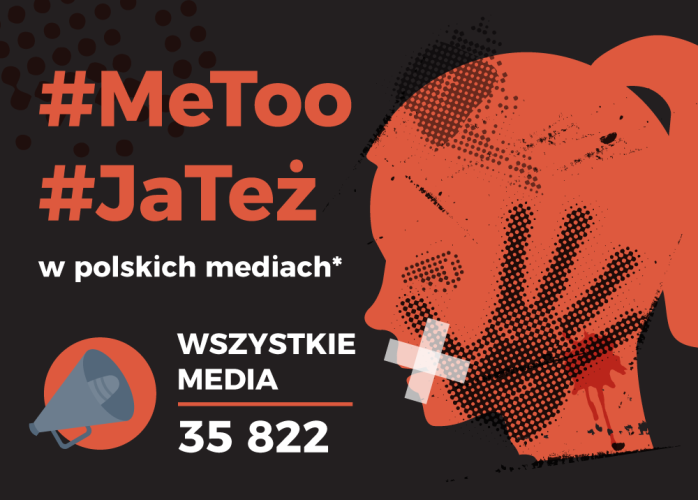 The scandal around one of the most powerful people in Hollywood was first brought to daylight on 5 October by New York Times whose investigation revealed that over several dozen years Mr Weinstein sexually harassed actresses, assistants and other women with professional ties to him. Allegedly, Ashley Judd was one of his victims. The daily reached eight women who were paid by the producer to keep silent.

On 10 October Gwyneth Paltrow and Angelina Jolie gave interviews in which they admitted that they also fell victim to him. Gradually, the celebrities were joined by more and more women allegedly abused by Mr Weinstein, including Alyssa Milano, an actress known to Polish audiences from e.g. TV series “Charmed”. On 15 October Ms Milano tweeted: “If all the women who have been sexually harassed or assaulted wrote “Me Too” as a status, we might give people a sense of the magnitude of the problem”. 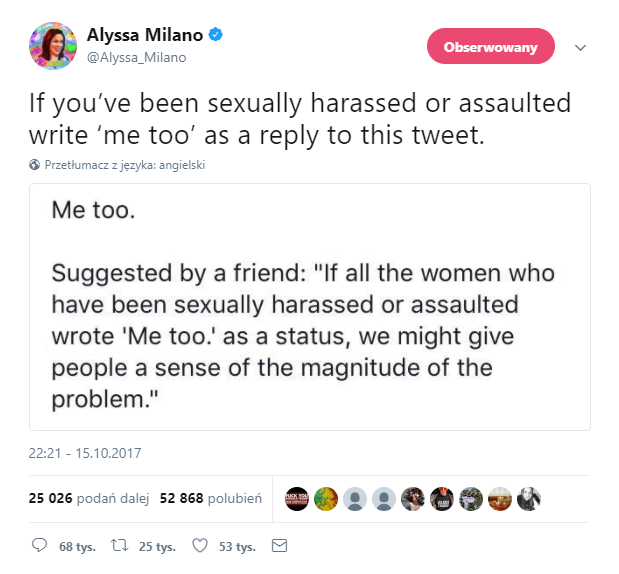 Ms Milano’s tweet gave rise to a flood of events. The hashtag #MeToo was created and snowballed across the Internet, growing in power to reach the size of an international social campaign. The campaign touched upon the sexual harassment problem not only in the acting community but also in the everyday lives of women across the world.

The hashtag spread across the internet at an exorbitant speed. Not only on Twitter, women were admitting that they had been victims of sexual harassment describing their stories. Over several days, one tweet turned into a gigantic international campaign which spread onto other channels.

Equivalents and translations of the English #MeToo appeared in France, #BalanceTonPorc, Canada #MoiAussi, Spain and South America #YoTambien and #QuellaVoltaChe in Italy, #גםאנחנו in Israel, أنا_كمان# in Egypt…

The number of people who posted on social media under #JaTeż (#JATez) is shocking. The stories which the women were bold enough to share with the world are shocking as well. The spontaneous campaign showed the scale of the problem and acceptance of women’s harassment in Poland and allowed the victims to finally speak and come together in saying NO to the existing social standards.

According to report on sexual abuse “Breaking Tabu” which was prepared by Fundacja STER, 87.6 percent of women in Poland experienced sexual harassment at work and in public places. Nearly a half of them (49.6 percent) were touched against their will. Over 40 percent got improper sexual proposals (also in electronic communication) and 7.5 percent were exposed to forced sexual contacts by threats at the workplace or school.

According to “PRESS- SERVICE Monitoring Mediów’s” analysis, between 15 and 22 October nearly 36,000 posts with #MeToo and #JaTeż phrase appeared in Polish media, including 35,000 in social media.

Polish social media responded to Ms Milano’s tweet nearly immediately – the first posts appeared as soon as on 16 October. However, the real post peak happened on 17 October. Despite the fact that the campaign originated on Twitter, Poles were most active on Facebook. 30 869 public posts and comments appeared in that channel by 22 October. 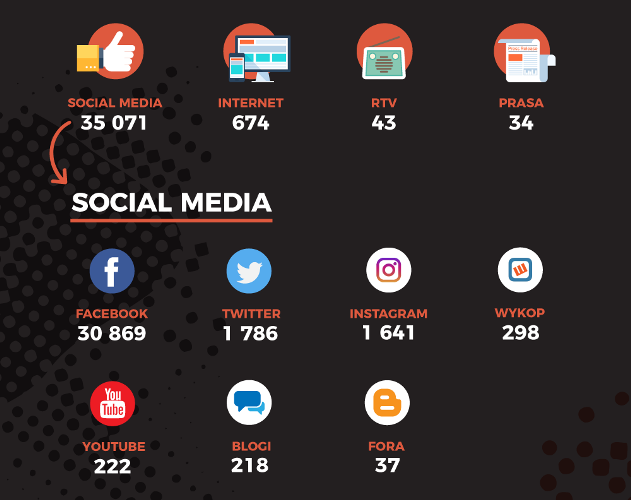 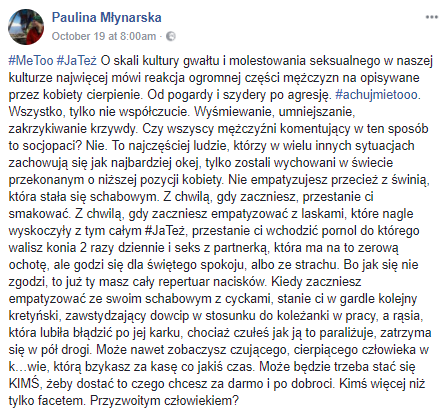 Apart from social media “PRESS-SERVICE Monitoring Mediów” also analyzed the traditional media. In the analyzed period, 674 pieces of information were featured in the internet, there were 43 RTV reports and 34 press publications. It proves that a strong message is capable of moving a strictly social media campaign to “traditional media”. As usual, the media started discussing the #MeToo campaign several days after Ms Milano’s tweet. 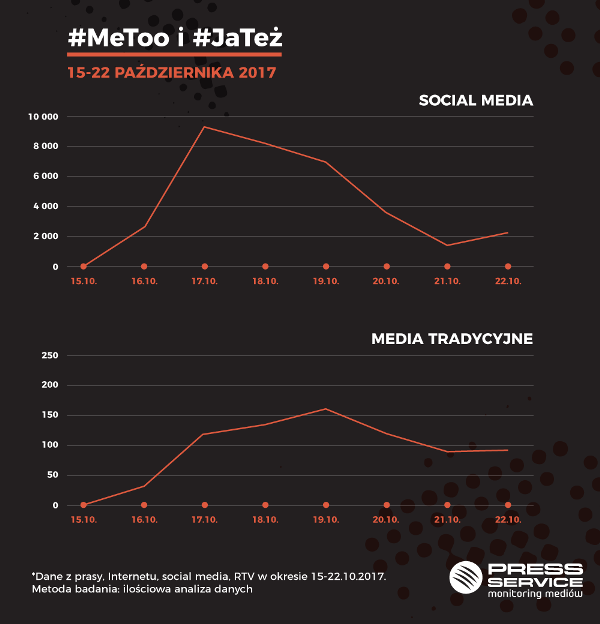 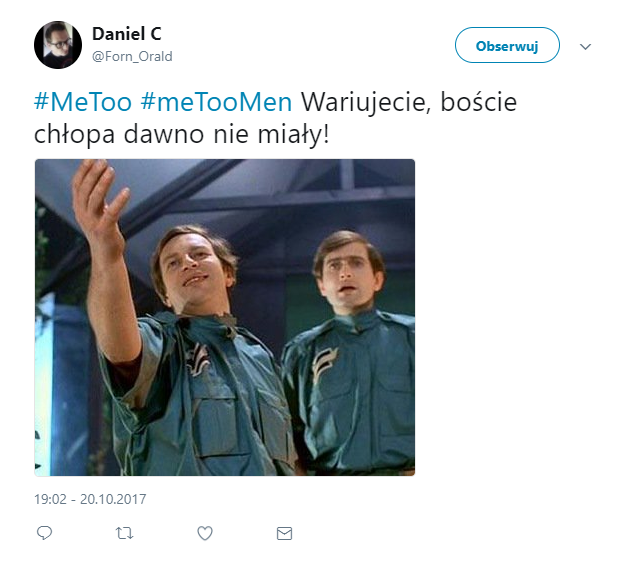 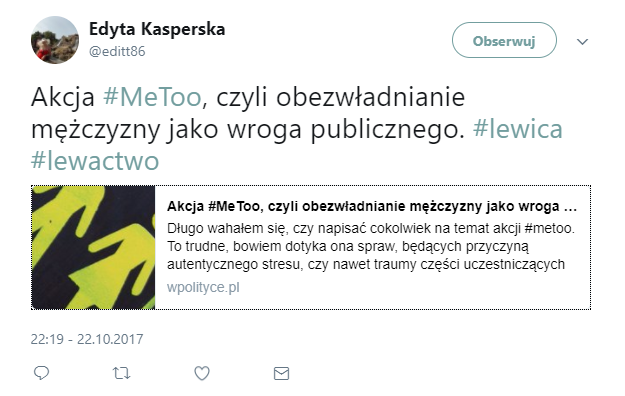 Eurobarometer’s “Gender-based violence” report which was published by the European Commission includes shocking data that as much as 27 percent of Europeans are of the opinion that sex without consent of the other person might be justified in certain situations. That many people quoted at least one such circumstance, e.g. when the other person is under the influence of alcohol or drugs (12 percent), goes back home on their own, flirts or has a big number of sexual partners (7 percent).

#JaTeż in a male voice

Harassment is a problem which is experienced not only by women. Despite the fact that the campaign was initiated by a woman, it touches upon an issue which might concern all of us. Male voices have also been heard in the #MeToo campaign. 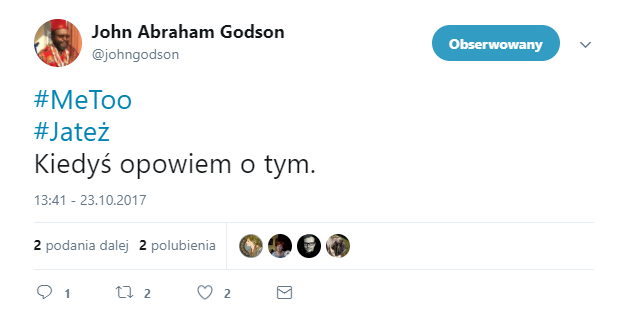 It was also joined by men who want to support their wives, mothers, sisters, girlfriends or daughters and show how the reality really looks. 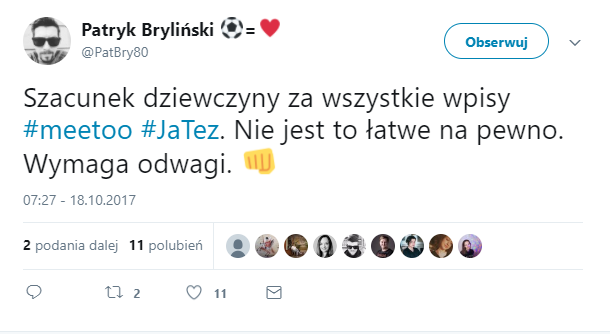 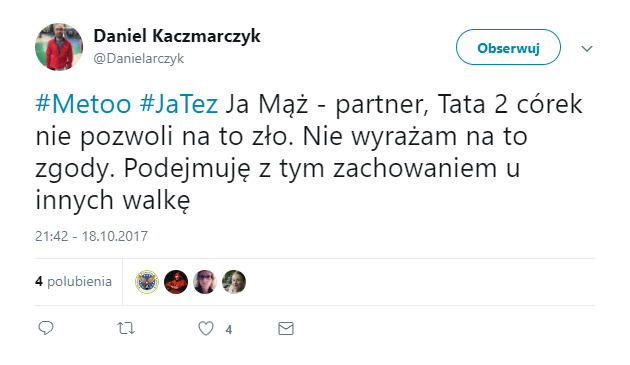 Marta Peksa, digital marketing manager at PRESS-SERVICE Monitoring Mediów: “In the times of digital reality, the speed at which information spreads and its range are really impressive. Having been born in social media, the #MeToo campaign was able to reach the still quite big analogue part of the society. It proves that one tweet can influence the content of traditional media across the world. And they are the ones which still have the biggest power to influence political elites. It must be asked whether it is possible that campaigns such as #MeToo could start real changes in the world. One should hope that they could.”