The innovation race is in full swing!

The innovation race is in full swing!

Smartphone producers and telecommunications operators virtually never cease to surprise their customers with new products. It might seem that the problems brought about by the pandemic must have hurt the two industries and cause them to slow down significantly. This couldn’t be further from the truth. According to the Top Brand 2020 ranking, i.e. a joint cyclical project of the “Press” magazine and the information agency “PRESS-SERVICE Monitoring Mediów,” brands from those sectors regained their full power despite the temporary slowdown and are still among those with the strongest and most effective impact on their recipients.

High positions in the Top 500

The first position in the Smartphones category as awarded to Samsung which collected 2,548,867 points. It was just slightly ahead of iPhone which scored 2,485,506 points although it had almost three times more publications and a slightly higher impact. Huawei was also on the podium with 2,293,148 points, having had more publications than the media winner in the sector. The following positions in the smartphone sector were taken by Xiaomi with 1,237,505 points and LG with 606,435 points and the highest sentiment index at 3.88.

The first three brands were included in the top 50 of the ranking on positions 38, 40 and 49 respectively. 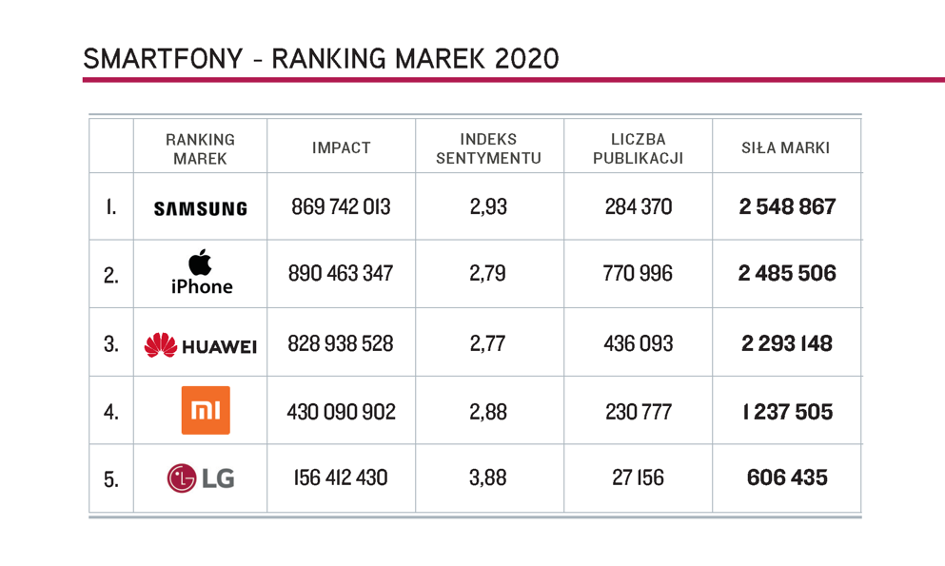 “The list of the media-strongest brands in that sector may indicate that the iPhone will eventually lose its leading position in innovation on the smartphone market,” says Antoni von Hake, media analyst at PRESS-SERVICE Monitoring Mediów. The first place was taken by Samsung which attracted the attention of journalists and users with the premiere of the new models of its Galaxy devices, i.e. S20, S20+ and S20 Ultra.

Most of the materials about the Top 5 mentioned products. The topics most frequently discussed in social media were the iPhone (97.2 per cent of the communication), Xiaomi (94.4 per cent) and Huawei (93 per cent). The biggest number of reports about LG was recorded in the press and on the Internet (0.9 and 23.9 per cent of the coverage).

The leading image of Plus in the telecommunications industry

New smartphone models and offers were the most common context in which telecommunications brands were present in the media.

“Telecommunications operators are mentioned in both traditional and social media. Their sponsorship activity also has an impact on the number of mentions. In the case of Plus, it is its support for PlusLiga, in the case of Orange, it is its sponsorship of the Orange Warsaw Festival and Opener,” says Kamil Wyszomirski, senior media analyst at PRESS-SERVICE Monitoring Mediów. 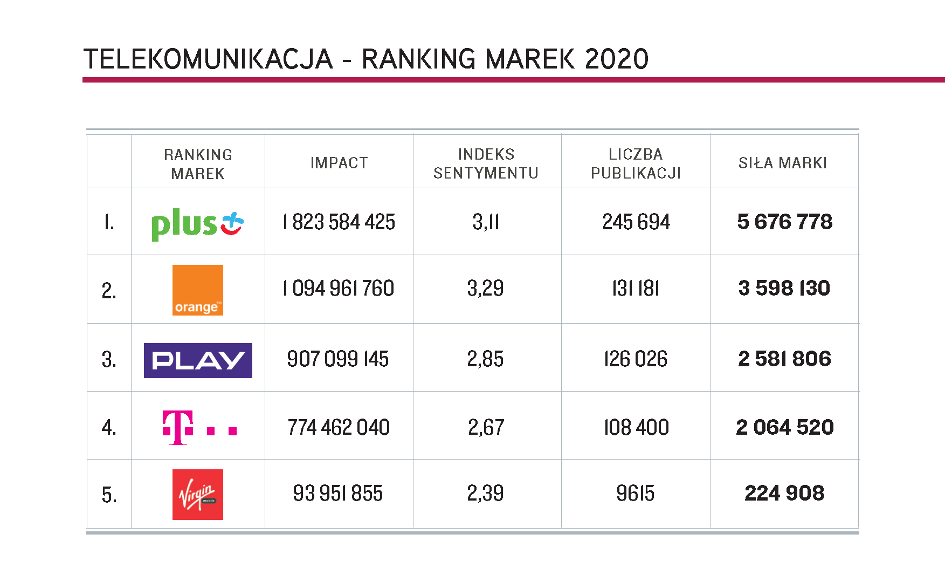 In the 13th edition of the “Top Brand” report, the study covered press, internet and social media content published between 1 July 2019 and 30 July 2020, i.e. in total over 97 million pieces of information including 2 million press texts, 15 million online texts and 80 million social media posts. The analyzed materials concerned the 10 strongest brands from the 50 industries with the strongest media coverage. In total, the report describes 500 brands. The study used the same indicators for all types of mentions, taking into account the specificity of the press, web portals and social media such as impact, sentiment index and brand strength.

Impact – the impact of a mention about a brand based on data on the consumption of the media outlet.

Sentiment index – a factor based on sentiment; it reflects the share of positive, neutral and negative publications in the overall communication about a given brand: the higher it is, the better.

Brand strength – the final value determining the position in the ranking; is an index of several variables reflecting both the number of recipients’ contacts with the brand and the qualitative assessment of the communication.