Rio 2016: Włodarczyk, Majka and Małachowski won in the media

XXXI Summer Olympics has gone down in history. 235 Polish representatives were awarded a total of 11 medals. “PRESS-SERVICE Monitoring Mediów” has summed up the media presence of the event and its medallists and found that the Anita Włodarczyk’s sponsors benefited the most.

62 thousand materials on the Olympics were published in the conventional media in the period from 5 to 21 August 2016. The largest number of publications was added on the Internet – 45 thousand, followed by the radio channel (6 thousand) and television (5 thousand). The subject was covered the least by the press (nearly 5 thousand). The advertising value equivalent of the media materials totalled PLN 362 million.

In the social media, 274 thousand messages were posted in the context of the Olympics. Internet users were the most active on Twitter: this portal alone produced 152 thousand tweets and comments. The second most popular channel was Facebook (102 thousand), followed by Instagram, Wykop and YouTube.

Internet users informed about the competitions in Rio de Janeiro throughout the analysed period, with the peak in their activity falling on 11 August. Men were much more active than women in informing about the Olympics. The materials on RIO generated nearly 3 million “likes”, 137 thousand reposts and 108 thousand comments. 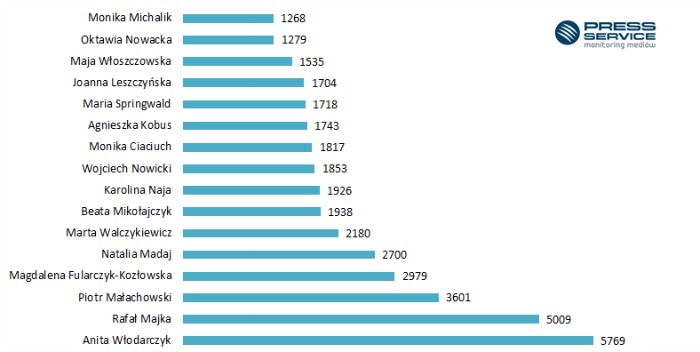 Medallists with the strongest media presence

In the context of the Olympics, a sport event of such great significance, journalists covered widely also the subject of its participants – particularly the medallists. Companies sponsoring such athletes as Anita Włodarczyk, Rafał Majka and Piotr Małachowski can consider themselves to be winners, too, because they achieved unprecedented returns on their investments. These athletes generated the largest number of publications and the highest advertising value equivalent.

By the number of media materials on the Olympics in the press, on the radio, television and Internet portals, the winner is Anita Włodarczyk, gold medallist in women’s hammer throw, who achieved a result of 5.7 thousand publications worth PLN 44.6 million.

“Such a large number of publications on Anita Włodarczyk proves how huge the expectations were for her performance. The world record holder coped with media pressure and secured her place in the history of the Olympics, winning the competition with a better result than the result accomplished by the winner among men,” explains Alicja Dahlke-Jurgowiak, PR and marketing expert at “PRESS -SERVICE Monitoring Mediów”.

Chart 2. Advertising value equivalent of publications on the subject of Polish medallists in the period 05.08-21.08.2016 r.

The advertising value equivalent of all the publications on the Polish medallists totalled PLN 284 million!