The Polish VoD market is winning an ever bigger group of users. Developing robustly on the Polish market, streaming giant Netflix has increased its series offering, adding new titles and investing into original productions. Are the most popular TV shows also commented on most often?

PRESS-SERVICE Monitoring Mediów has prepared its report “Netflix’s series with the best media coverage”, analyzing “Spider’s Web’s 20 Netflix Originals”, a ranking of TV shows with the best scores awarded by IMDb and Filmweb community. In total, the ranking encompassed 25 TV shows because some of the were granted equivalent scores. For the purposes of the media coverage report, we analyzed publications from the internet and social media which were featured between 1 September 2017 and 31 August 2018. 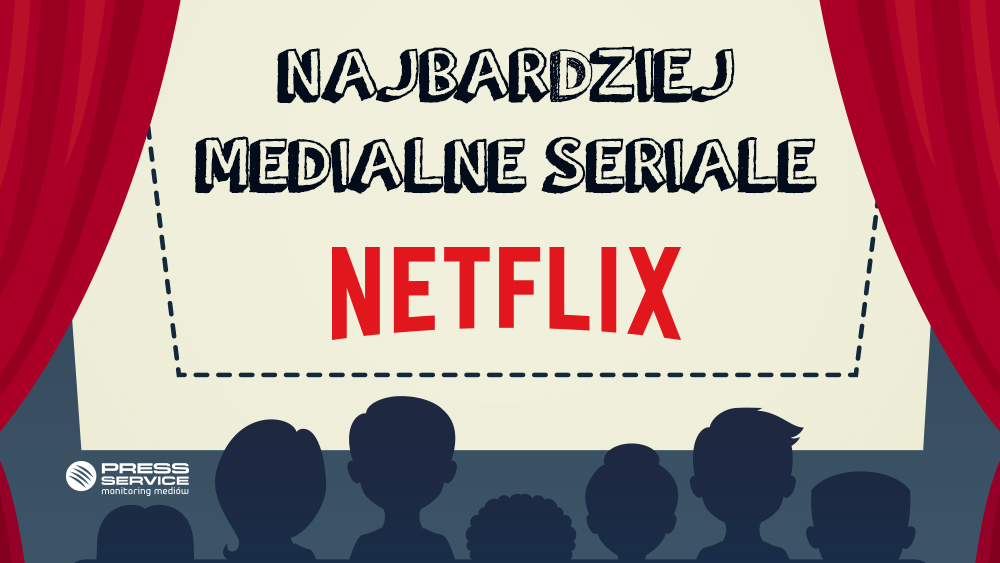 “Stranger Things” turned out to have generated the most media coverage. 82,200 materials were devoted to it, with 92 percent of them having been posted on social media.

“Narcos” was the second most popular series. However, it collected three times less materials than the media coverage leader (25,000). The last position on the podium was awarded to “House of Cards” with 14,900 reports. It is worth pointing out that the show got the highest score in Spidersweb.pl’s ranking.

The fourth “Orange in the new black” got 13,700 publications. It was followed by “Money Heist” which was mentioned in the web in 9,400 posts.

“The TOP 5 most media popular series include nearly exclusively titles whose first seasons debuted before 2017”, comments Sebastian Tomaszewski, a PRESS-SERVICE Monitoring Mediów analyst. “Money Heist” is an exception. The Spanish production gained a big fanbase in Poland, a fact which can be confirmed in e.g. the number of posts on social media. The over 8,700 mentions is more that those generated by well-known sci-fi anthology “Black Mirror” or David Fincher’s popular show “Mindhunter”.

Belgian series “Tabula Rasa” turned out to have attracted the least attention from the media, having been mentioned in 37 internet publications and only 107 social media posts.

In total, as many 187,000 reports were published about the 25 analyzed titles. Their advertising value equivalent* and impact** were estimated at PLN 87 million and 697 million potential contacts respectively. 88 percent of the materials came from social media.

Top 3 with the best impact

“Stranger Things”, “House of Cards” and “Narcos” had the best range according to Spider’s Web’s ranking. The first one might have generated impact at the level of up to 194 million audience contacts with the information. The production was particularly popular on social media (92 percent) while the biggest number of mentions were posted on Twitter (29,400) and Facebook (26,800). Naekranie.pl, Antyradio.pl, Spidersweb.pl, Serialowa.pl and Eska.pl were the most active internet sources.

The impact of Kevin Spacey’s show was estimated at 118 million potential audience contacts with information. The share of social media mentions for “House of Cards” was at 76 percent. 5,300 pieces of information came from the most popular service Facebook while 2,900 pieces were posted on Twitter. The Internet TOP5 was made of up: Wywrota.pl, Naekranie.pl, Spidersweb.pl, Serialowa.pl and 4stars.pl.

“Narcos” generated impact at the level of 101 million contacts. 10,000 posts were made on Facebook while the number of tweets reached 6,400. The biggest number of online materials were published by: Spidersweb.pl, Moviesroom.pl, Ppe.pl, Wirtualnemedia.pl and Filmyfantastyczne.pl. 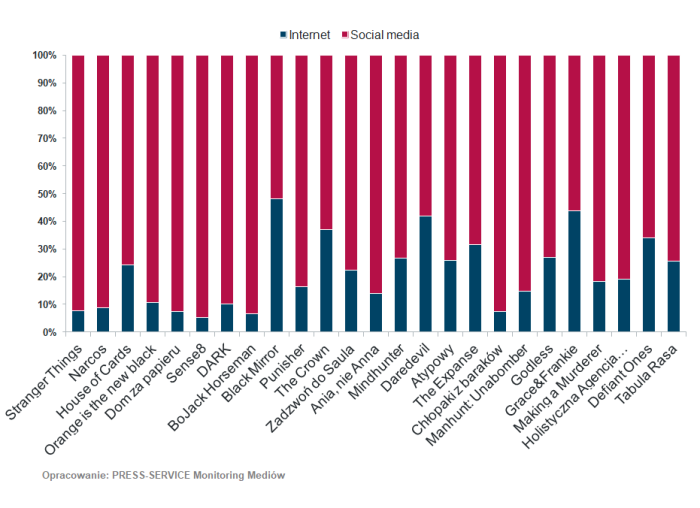 Chart 1. Percentage of publications devoted to the analyzed Netflix series

Place 4 with that respect was awarded to “Black Mirror” which got the best share of information in the internet out of all the titles in the ranking – as much as 48 percent. Publications devoted to it had a much better reach (45 million) than materials on more media popular productions such as “Orange is the new black”, “Money Heist” or “Sense8”. The latter had the biggest share (95 percent) of information from social media.

Media leaders generated clear-cut peaks in the number of pieces of information. The biggest one was generated by winner “Stranger Things”. Its Season 2 premiered in October last year, leading to 16,000 pieces of news that month and 17,500 the following one.

“House of Cards” gained a lot of publicity again in November 2017. The month saw 3,400 pieces of information mentioning its title. It was due to allegations of sexual harassment made against its central figure Kevin Spacey. Due to the reports, Netflix cancelled its contract with the actor and introduced changes to “House of Cards”.

A clear peak in the number of publications was also visible for “Narcos”. The third season which premiered in September 2017 was the first one without the protagonist of the two previous editions, i.e. Pablo Escobar. That resulted in 7,100 materials in the web. 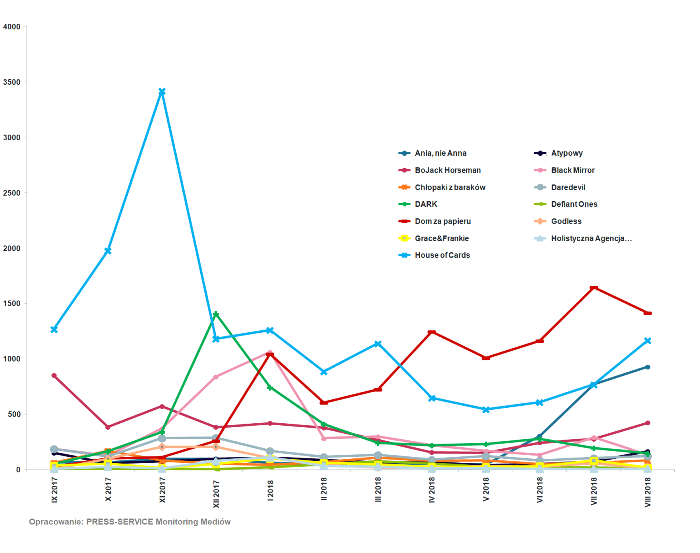 In short, the biggest number of reports about a given production most often appeared around the premiere of its current season on the service. Features such as “Money Heist”, “Daredevil”, “The Expanse” and “Making a Murderer” were an exception.

““Money Heist” was consistently gaining popularity ever since the premiere of its first season in 2017 (the second one was launched in April 2018), however, the biggest number of reports appeared in July 2018 together with the news that Netflix acquired all the rights to it and planned to launch season three”, explains Sebastian Tomaszewski. In the case of “Daredevil”, new episodes were not aired in the analyzed period but the title was very popular in November 2017 during the premiere of the “Punisher”, i.e. another comic book series by Netflix and Marvel. The protagonist of that production is known for having made his TV debut on “Daredevil”. 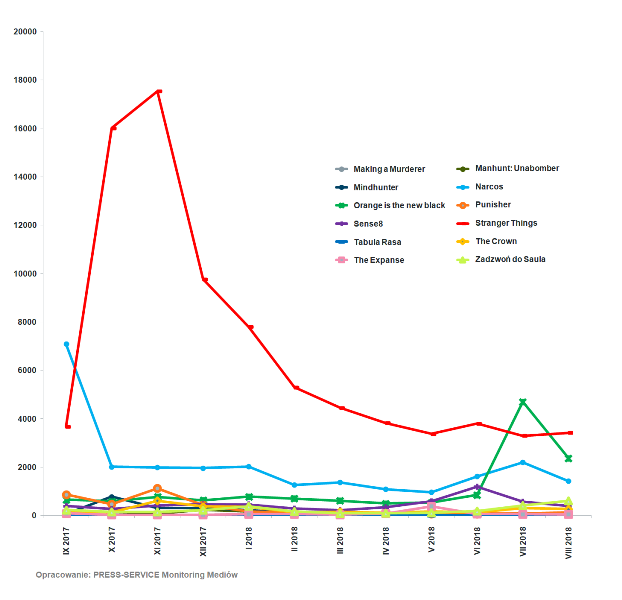 “The Expanse” was most popular in May when the series was in danger of cancellation. Amazon acquired all the rights to it. Award winning documentary “Making a Murderer” which debuted on the service in 2015 gained a lot of publicity once again in March when it was listed among series presenting cigarette smoking scenes most often – the unusual ranking was created by The Truth Initiative, an organization which promotes healthy lifestyle.

*Advertising Value Equivalent is an indicator used to evaluate the weight of media information, comparing the space, number of views, number of unique users or air time of a given piece of information to the same advertising broadcast. It denotes a sum of funds that would have to be spent if a given material was an ad.

Estimated advertising value equivalent takes the value of the entire information into account.

**Impact is an indicator which makes it possible to estimate the actual number of contacts with a single publication. Impact is attributed to a specific publication and refers to actual behaviors of members of the audience, i.e. the ways and frequencies of their use of the channel.